I spent most of my  elementary school education in the cloak room — a dark space at the back of the classroom — where free thinkers and rule mockers sulked until the final bell jangled each day. That, combined with ditching two weeks in fifth grade, landed me in a private school located in the middle of nowhere.

Actually, it was Albuquerque’s north side. But in 1969, especially for a hostile 11-year-old kid, it could have been Mars — without the possibility of water. (If anyone has seen or read HOLES, think Camp Green Lake.)

Set on ungenerous, dusty land, where tumbleweeds grew and cacti pricked, Sandia School was my version of hell. When the winds came up, grit coated our teeth — no matter how tightly we clamped our lips together. Playing field hockey (remember that, girls?) on the patchy grass usually netted more thorns in our white bobby socks than goals through the holey nets.

Sandia School also stank because it admitted only girls. The student body was so small that people noticed when I didn’t show up for class. And, the teachers made me work. Damn them!

Unwilling to succumb to these horrors without a fight, I’d hang out with another rabble rouser during free periods. Our preferred locations for rebellion were an underused bathroom where we could smoke, um, something . . . and at the edges of the undeveloped, and prohibited, acreage surrounding the school. There, we’d find the most amazing things. Turning over trash and complaining about how miserable EVERYONE ELSE was making us, we discovered a true desert centipede that was orange and about four inches long. We spotted coiled bullsnakes, round and plump horney toads, too many lizards to count, stink bugs with their butts pointed skyward, and, once, a $5 bill.

After a particularly irritating class my first fall at the school, my friend and I sought the refuge of our open space haven. Near a chain link fence — one we felt was designed to imprison us forever — a white stick caught our attention. We searched further and discovered another, curvy with holes, and then, yet another, as straight as an ice pick. Sun-bleached clean, these treasures reminded us of the fake skeleton that hung in our science lab, but we both surmised that our finds came from a cow or other wild animal; we’d seen carcasses out there before.

Still, we couldn’t keep our glee to ourselves. This booty deserved a wider audience. Though knowing we’d get into trouble, we brought the bones back to our favorite — or least detested — teacher.

Mrs. Gustafson, the 6th grade science maven, took one look at them. Her pink, cherubic face blanched. "Where did you find these?"

"Where, exactly?" she said, taking our hands and leading us to the headmaster’s office.

That was it. We were going to be expelled. Our parents would kill us. Our bright futures would be snuffed out right there. It just went to show that NO ONE over 15 could be trusted.

Instead, the headmaster picked up the telephone and called the police.

During the next few hours, we got to skip all kinds of annoying classes. A wonderful reward. We spoke to uniformed officers and anthropologists from the University of New Mexico. I had more excitement educationally than I’d ever experienced before that day. In light of Louise’s beautiful post last Tuesday, this week I went back emotionally to that moment, the realization that these bones had been a person, to see what I felt. No nobility of spirit there. I wish I could say that those bones inspired me to become a mystery writer, but it’d be a stretch. Frankly, at 11, it just seemed incredibly cool–a Nancy Drew moment of sheer luck and adventure.

Hummm. On second thought, it may have influenced me more than I realize . . .

It turned out that the femur, pelvic bone, and humerus were from a female Pueblo Indian who’d died about 100 years before. Apparently a small portion of my school’s property unintentionally had been built on a burial ground.

Fast forward more than 30 years. In an odd twist of fate, one of my children will be attending a local private school here this fall. For this kid, it’s a joyous and wonderful proposition. Unlike Mommy-dearest, this child loves academics, lives for homework and thinks teachers are gods incarnate.

Guess what? An ancient pueblo was discovered on the new school’s land this year. My child will have the experience of working on a real archeological site. That just astounds me.

I often contend that New Mexico is wondrous and that being raised here is part of the reason I’ve chosen this literary path. When you live in a place where human influence is dwarfed by untouched land, where ancient history abuts contemporary life, where daily you’re astonished by the natural world . . . sensing mystery in each moment becomes a way of life.

View tweet on TwitterIn reply to GOODBYE, LARK LOVEJOY comes out in a month!

@KrisErinClink @ceciliaclyra Ha! My students used to tell me we were doppelgängers. Emphasis on used to. 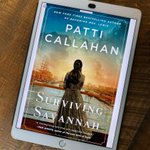