Sometimes, you just want to share travel photos.  And that’s what I’m going to do here, but I also want to say a few words about what brought me to Victoria, BC in the first place, and that’s the Bloody Words Conference. I was invited there as the “International Guest of Honor”, which was an honor indeed as it involved one of the most delightful few days I’ve ever spent at a writers event.  First, because it was a very low stress conference where I only had to sit on panels.  In my last blog post, I talked about how anxiety-producing it can be to solo- teach a workshop.  But panels are more like a conversation, a chance to share your honest, off-the-cuff thoughts, without the labor of composing prepared remarks. (If you want to keep writers relaxed and happy, make it a panel program!)

The other reason I had such a fine time was the fact we were in Canada and there’s something about Canadians that’s so darn, well… nice.  They’re not just helpful, they seem happy to be helpful. It started at the Victoria airport, where we discovered that my husband’s suitcase didn’t make the three-transfer flight from Maine.  He was standing there at the carousel, looking bereft because he hadn’t packed a toothbrush or even a change of underwear in his carry-on.  Suddenly an airport employee came swooping in from nowhere to ask if we’d lost a bag, and said: “Let’s just see what we can do!” After the necessary paperwork was filed, he handed my husband a sack with a shaving kit, toothbrush, shampoo, and detergent.  In all the years I’ve flown in the U.S. and lost bags (and it’s happened half a dozen times) I’ve never met anyone so anxious to help a beleaguered traveler.

Why are Canadians so nice?  I posed this question while I was there, and one fellow offered brightly: “It’s because we’re so happy not to be Americans!”  He was quickly shushed up by his countrymen because “that’s not a nice thing to say.”  From taxi drivers to bellmen, rental car clerks to waitresses, there was something so different about the way they treated us there.  Instead of the bored and disinterested “I’ll have to check with management about this” that you hear so often in the US, what we heard in Victoria was “of course we can do this for you!”

At one point, my husband turned to me and said, “Tell me again why we live in the US?”

The conference itself was, as you’d expect, a friendly and collegial affair.  I was curious about the state of genre publishing in Canada, and was not surprised to hear about the same woes I heard in South Africa.  With a population that’s only a tenth of the US, Canadian writers simply don’t have a large enough readership for them to make a living, unless they sell internationally.  The US is considered the “elephant to the south,” the market that’s too huge to be ignored, and the market that everyone wants to penetrate.  In crime fiction, Americans are certainly familiar with Louise Penny, Rick Mofina, Linwood Barclay and Peter Robinson, but too many other Canadian crime writers simply aren’t distributed in the US.

But now that there are e-books, it should be an international market, right?  Why don’t Canadian authors simply sell to Americans via Kindle? I discovered it isn’t as easy as just emailing a file to Amazon.  To self publish an e-book for sale to American Kindles, you must have an American bank account and mailing address.  That, at least, was what one Canadian told me.  Which makes it a bureaucratic hassle to sell your own books south of the border.

Another complaint I heard was the lack of publisher support in Canada for genre fiction.  Publishing is partially subsidized by the government, and literary novels get all the financial support and review attention while genre fiction is left to fend for itself in the marketplace.  It’s not surprising that genre writers, who actually make a profit for their publishers, are a bit resentful.

One of the best things about international conferences is the chance to meet authors I wouldn’t otherwise meet at US conferences.

Michael Slade, the Canadian Guest of Honor, comes to crime writing with a lifetime’s worth of expertise under his belt.  He’s a criminal defense attorney, and some of his real-life stories will make your jaw drop.  (Like the time a satisfied client offered to kill any person of Michael’s choosing as a token of his appreciation.)  Michael originated “Shock Theater”, a staged reading of radio plays at various mystery conferences, and I was allowed in on the fun when we read “Chicken Heart.”  It’s a truly stupid play, but loads of fun to scream over.  Michael’s legion of fans are called “Sladists”, and they’re so devoted to Michael that one of them peeled down her pants to show off the “Sladist” permanent tattoo just over her rear end.  Now that is true fan devotion. 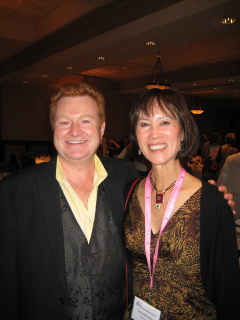 Grant McKenzie is a Scottish-born Canadian journalist whose crime novels have been translated into German, Chinese, and Russian.  He interviewed me for an afternoon session, and it was a truly delightful conversation.  He’s a terrific novelist who’s published internationally —  just not yet in the U.S.  I hope American publishers are taking note! 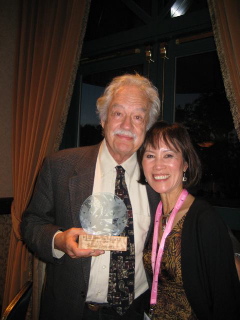 William Deverell, the local Guest of Honor, is another Canadian crime writer who brings a rich lifetime of experience to his novels.  He’s the Dashiel Hammett-award winning author of fifteen novels, including the Arthur Beauchamp series.  He’s also an attorney who’s been involved in more than a thousand criminal cases, serving both in prosecution and defense.  Bill and I had a lovely private lunch together where we talked about writing, the future of publishing, and some of the fascinating criminal cases that he’s litigated. 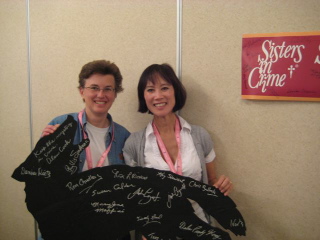 Booksellers were at the conference as well, and here’s Frances Thorsen of Victoria’s “Chronicles of Crime” mystery bookshop, along with the author-autographed coyote placard that will hang in her shop.  Frances sat on a panel called “What’s hot, what’s not”, about trends in crime fiction.  If you want to know that answer, just ask a bookseller! 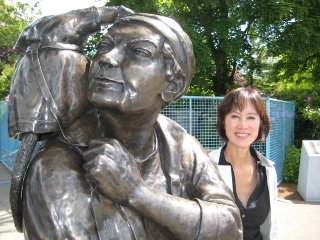 Here’s a photo of me with another writer.  It’s a statue of local Victoria heroine Emily Carr, with her pet monkey perched on her shoulder.  Hats off to any town that chooses to honor its authors. 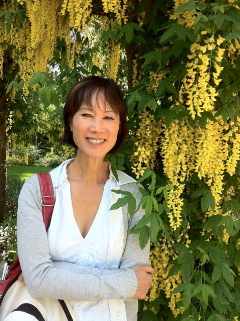 After the conference, it was off to see world-famous Butchart Gardens, where I ogled gorgeous vines of golden laburnum.  It’s a poisonous plant, by the way, which was used as a murder weapon (fictionally) in the TV mystery series “Mother Love.”

Finally, no set of travel photos is complete without at least one shot of food: 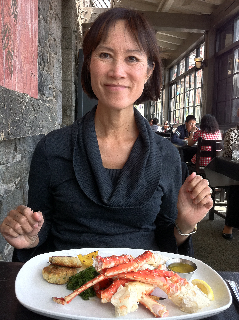