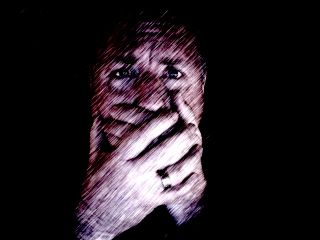 I have never believed in writer's block. I've always felt that no matter how dire things might seem, no matter how stuck you might get in a story, no matter how difficult it might be to start a story, as long as you put your fat ass in that chair and start typing, something will come.

Because it has to.

Every writer in this crowd — every novelist, at least — knows how wonderful writing that first book was.  You may have given yourself a specific amount of time to write it or you may have simply written whenever you could, whenever you felt inspired.  But your time was your own.  You were
beholden to no one but yourself — and, quite possibly, to the family and friends you kept promising would one day hold your published book in their hands.

But again, as every writer in the crowd knows, once you get that publishing deal, you are under the gun.  You must write or perish — and that's a completely different mindset.

That mindset, in fact, can often result in what Harley Jane Kozak calls Secondbookitis, in which the writer spends an entire year (depending on his or her deadline) screaming inside, a bundle of nerves and raw emotion, victim to late-night crying jags and a feeling of dread so pervasive that it's a wonder you can drag yourself out of bed and over to the word processor every morning.

But we do it.  We manage to sit our asses down (fat fat fat fat fat) and put our fingers on the keyboard and let them fly.

Because we have to.

So I don't believe in writer's block, simply because I can't afford to.  I have a deadline to meet, so I meet it (more or less.  Okay, Mr. Resnick, quit laughing).

Unfortunately, I have come across something that, while not potentially as devastating as writer's block, is certainly cause for concern:

I used to write a blog called Anatomy of a Book Deal.  For two years or so, I would write a new entry every two or three days and, at its peak, the blog was getting around thirty thousand unique hits a month.  Since I was chronicling the evolution of my career as a virgin novelist, I had no trouble finding subject matter and blogging became part of my weekly routine.  It was an effortless enterprise, a chance for me to share the wonderful experience I was going through at the time.

But I didn't just write the blog.  I also became a comment whore.  I went to dozens of writing blogs and commented on nearly every post I read.  Part of this was PR and part of it was, again, the desire to share.

I think if you took all of my blog entries and all of the comments I made on other blogs over that period of time, you'd probably have enough material for half a dozen books.  Extremely boring books, no doubt, but what I may have lacked in quality, I made up for with enthusiasm (wait — how did my sex life wind up in this?).

Then, shortly after the release of my first book (KISS HER GOODBYE, a great gift for your friends and loved ones), I experienced blog burnout.

And I wasn't the only one.  Nearly all of my friends who were coming up with me at around the same time, had also been blogging furiously, and whenever the subject of blogs was brought up you could hear the collective groan all the way across the Atlantic.

We were all suffering from blog burnout.

And slowly but surely, we all began to blog less and less, many of us shifting over to group blogs like Murderati so that it became a twice monthly deadline rather than every other day.

But despite the burnout, I've still managed to come here every two weeks and find something to say.  What I've had to say hasn't always been compelling — as evidenced by the low comment count at times — but at least I've managed to find something.

Until now, that is.

I am, ladies and gentlemen, suffering from a terrible, terrible case of blogger's block.

Even though I knew my deadline was approaching, that I had a post to write for Murderati, I could not for the life of me figure out what to write about today.  Every time I thought about it, the wall would go up and that wall must be made of lead, because nothing can penetrate it.

I tried going back through all the recent Murderati posts to see if any of them would spur something, but no luck.  I went to other blogs to see what they were talking about, hoping I could rip-off some interesting subject matter.

I'm blog blocked and I think there's only one thing that can save me:

Taking some time off.  So, I've decided, for the next two weeks I won't be writing another blog post.  No matter how much you might beg me, no matter how many comments you may throw my way, I will not be contributing to Murderati again until Wednesday, April 8th.

In the meantime, I have to ask you if I'm alone in this.  Do those of you who write blogs ever feel as if you have just completely exhausted any and all subject matter to blog about?  Do those of you who read blogs find your eyes glazing over when the writers of said blogs start to bitch and moan that they have absolutely nothing to say?

I'm beginning to understand the appeal of Twitter.  You have 140 characters to get to the point.  Will there be a day when one of my tweets goes something like this? —