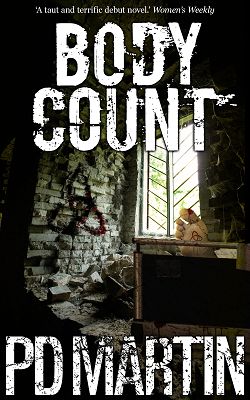 These last few weeks I’ve been experiencing a real blast from the past. You see, a couple of months ago I contacted both my US and Aussie publishers hopeful that the rights to my Sophie Anderson series (Aussie FBI profiler) had reverted back to me.

Reversion of rights used to be the kiss of death for authors. Generally, no publisher would buy the book again to re-launch it (except perhaps if you went on to write a best seller and your new publisher was keen to acquire your back list). Then, ebooks happened. Now, reversion of rights is actually an exciting prospect for an author. Especially given one of the keys to ebook success is volume — having more than a handful of titles available to build your name and, of course, sales.

So, I was very happy to find the rights had reverted for ALL my Sophie titles with Pan Macmillan Australia. My contract for the US required much longer time frames to be served, but I was hopeful maybe book 1, Body Count, would be up for reversion. Unfortunately, not. Even though it’s out of print in the US, because I gave my North American publisher worldwide rights (excluding a few countries) it just has to have been printed somewhere recently (or due for a reprint). In the case of Body Count, apparently a reprint is scheduled of the French edition. While it’s great the reprint is happening, it’s frustrating that I’ll only be able to make my Sophie novels available to people in Australia and New Zealand.

This is particularly concerning given we represent such small markets on the global side of things (given our populations), plus so far Aussies have been very slow to adopt Kindles and other ereaders. (I’m not sure about New Zealand’s adoption rate of ereaders.) After some debate, I decided it’s still worthwhile to get them up there. Maybe I can be one of the Aussie authors getting in at the ground level, before Kindles take off!

So, for the past two weeks I’ve been taking another look at Body Count. It’s the first time I’ve read the book since the page proofs, back in 2005. There are a few minor things I’ve always wanted to fix, and other things I’m finding along the way. For example, I really steer away from dialogue tags now (he said, she said) and aim to use descriptions to attribute dialogue instead. To give a very basic example,

I’m also now mindful of the ebook medium and will be doing one pass entirely with the aim of breaking up a few chapters. I think some shorter paragraphs and shorter chapters work well for the ebook format and help give a book that page-turner feel. Plus, I’m concerned the book starts too slow so I’m hoping to cut out around 5,000 words from the first 1/3 of the book. That’s going to be a tough job, though, and I’ll devote one editorial pass just to that task. Deleting scenes is never easy for an author.

Of course, I’ve also been getting the cover designed. Like it?

So, Murderati, questions for today. When you revisit a book several years later (as an author or reader) how does it hold up? For those of you who read ebooks, do you agree that shorter paragraphs and chapters work better?

Special note
To all our US readers who observe Thanksgiving, I’d like to say Happy Thanksgiving! Hope you have a great day, filled with good food and good company, with many things around you to give thanks for.

2 thoughts on “Blast from the past”