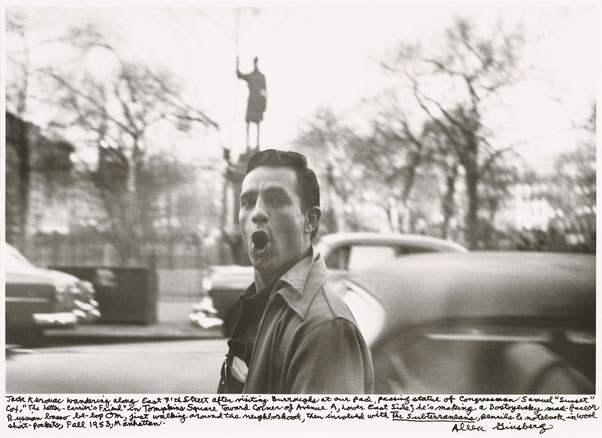 Have I made it perfectly clear yet that I’m obsessed with Jack Kerouac?

I think I mention Kerouac and the Beats every time someone asks about my literary influences.  But I don’t really think of myself as a guy with obsessive tendencies.  I don’t have a thousand lunch pails sporting images of Superman or characters from The Andy Griffith Show.  I don’t paint tiny army figurines and play them one against the other on a giant, Styrofoam battlefield in my garage.

But the way I feel about the Beat Generation…kinda sounds like obsession.

I’m not alone.  There’s a something somethingness about these folks that translates into every language, crosses every border, travels the world and appeals to millions.  I remember feeling crushed when I discovered there were others like me.  The relationship I had with Jack Kerouac, Allen Ginsberg and William S. Burroughs felt personal, like I rode shotgun at their side through all the adventures.  I didn’t like the fact that my feelings were not special or unique.  And, when I finally accepted that I was not the reincarnation of Jack Kerouac (every Beatnik goes through the phase where he insists he’s Jack reincarnated), I learned to enjoy sharing the Beat universe with others.

How do I explain the appeal of the Beats?

It starts with Kerouac.  He’s the center of the storm.  I posted a blog a little while ago with a link to Kerouac reading from On the Road.  My blog was about the musicality of his writing, the fevered saxophone solo of his words, his syncopation and meter and rhythm.  That’s the first thing that got my attention.  Just hearing Jack read his own work took me to another place.  It was the marriage of music and literature, poetry and jazz.

Last week I was in San Francisco for a too-brief moment and I visited one of my favorite places in the world, the Beat Museum. 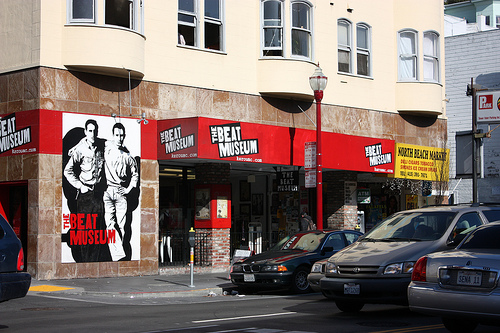 There’s a TV monitor near the entrance playing a continuous loop of Kerouac, with the sound turned off.  It was playing the same segment I mentioned above, the one I have linked to my previous blog.  I watched it again, silent, observing Jack’s body language as he read, hearing the words memorized in my head, knowing every camera angle, expecting the crescendo of music and words as the sequence came to an end and the lights came up and the camera pulled out to a wide shot, in total silence.  And I noticed something I had always seen but hadn’t really acknowledged.  It was a look in Kerouac’s face, a reluctance to let it go, to leave the place in his head where he’d gone while reading his work.  I wouldn’t be surprised if it was Nirvana, where he’d gone.  It showed in the way he seemed to grapple for something lost, something held for a moment in the palm of his hand, before the music ended and the lights went up and the camera pulled back and out.

In that moment I saw Kerouac’s vulnerability.  His complete and total honesty, open for the world to see.  And I think that’s the real appeal, that’s what draws so many millions into his orbit.

The Beats were nothing if not honest.  They lived lives of chaotic adventure, documenting everything they did, felt and saw.  They weren’t ashamed by their actions.  Their lives were their art, America the canvas.

Now, remember, this was the 1950s.  Before reality television brought media-starved souls into our bedrooms to entertain us with the wreckage of their lives.  This was before Andy Warhol gave every American permission to seek fifteen minutes of fame.  People didn’t expect to receive instant adulation on a worldwide stage.

It was the era of “Leave it to Beaver,” the Marlboro Man, the Red Scare.  A Post-War America with a black-and-white setting.  Shades of gray didn’t exist until the 1960s.  In the 50s you were either perfectly good or…perfectly bad.  And, if you were just a little bit bad, you were perfectly bad.  If you smoked a little weed, if you liked to listen to jazz…you might as well shoot heroin, pop speed, have sex with your neighbor’s wife and rob your friends.  All of which the Beats excelled at.

So, is there anything to admire about that?  Is that heroic?

The fact is, they lived, man.  These cats were full of life.  They did not compromise in their search for meaning.  They blew through this land, rolling across our virgin highways, searching out America, testing the caliber of their souls along the way.  Their message was peace and friendship and love.  They lived their lives fully, whatever the cost.  And the cost was high, in the 1950s.

Kerouac was talented and sensitive and vulnerable and he ultimately killed himself with booze.  Frustrated, he drank because he was misunderstood.  His publishers and the media and the critics sold him as America’s “bad boy.”  They didn’t look at his writing, didn’t acknowledge the value of his fresh, new style, didn’t hear the questions he posed about the meaning of life.  He was cast as the harbinger of restless meanderings and delivered to a hungry, eager youth ready for action, encouraged to use On the Road as their map into naughty new places where sex, drugs and jazz defined the essence of cool.

While Kerouac was the match that lit the flame, he was not the whole movement.  One man does not a Generation make.  A number of colorful cohorts traveled at his side, folks like Allen Ginsberg, William S. Burroughs, Neal Cassady, Carolyn Cassady, Gregory Corso, and Lawrence Ferlinghetti, to name a few.  Their writings challenged the conventions of the day, setting the stage for an even greater revolution yet to come.  These were the original road-trippers.  The first hitchhikers.  Doing it all before the hippies hit puberty.

I have a pretty significant collection of Beat literature in my library.  Sometimes I stand in front of the shelves and stare at my copies of On the Road, The Subterraneans, Big Sur, Naked Lunch, Queer, Junky, Howl, Kaddish, Memory Babe, The Town and the City...just being near the stuff connects me to my core.

Whenever I’m in San Francisco, I visit the Beat Museum.  It’s a place where I can talk with other obsessive beatniks about the minutia of Beat life.  I also chat with folks who come in off the street, come in from all over the world, really.  Some know their shit while others are taking their first Beat-baby steps.  I love introducing Kerouac to a new generation of readers and fellow road-trippers.

Last week I had nowhere to stay and no money for a hotel and I didn’t want to bug Louise or Allison Davis or anyone I knew and what I really wanted to do anyway was beg Jerry Cimino, owner of the Beat Museum, to let me spend the night in the museum.  Yes, IN the museum.  I’ve known Jerry for a couple years now, ever since he introduced me to the San Francisco beat cop who would become my main source for research on BEAT, my sequel to BOULEVARD.

Jerry, being the cool cat that he is, let me stay.  I slept in a period chaise-lounge beside a jacket once owned by Kerouac, in front of a collection of one hundred copies of On the Road translated into 25 different languages.  I was like a Beat Generation centerpiece.  I was like a Kerouac collectible. 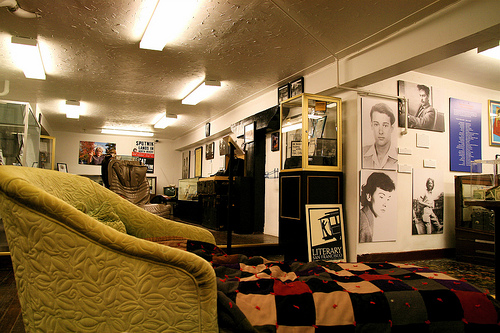 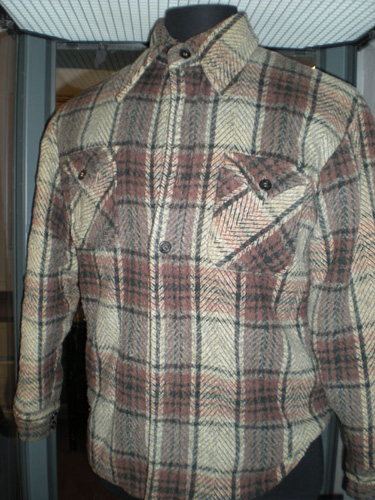 (Right next to Jack Kerouac’s jacket) 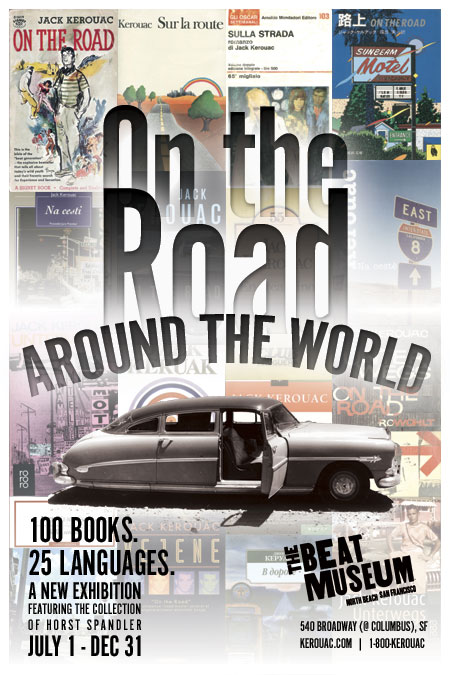 It was a Friday night and the world outside the museum walls was a-rockin’.  I was in the center of North Beach and from inside the museum I could hear the wild raucous live music of nearby clubs, the screaming and yelling and laughter of twenty-somethings let loose for the weekend, the crash of beer bottles, the sirens from police cars and ambulances, the hushed sounds of hoodlums smoking pot just outside the door, the call of barkers from Big Al’s strip club across the alley.  And me, stepping softly barefoot on the wood floor, looking at photos of Kerouac and the gang, reading titles from their books, letting their history engulf me.  I felt like a bridge between the San Francisco of their era and the San Francisco that screamed and danced on the other side of the wall.

It doesn’t get much better than that for a Beat junkie.  Except maybe to lie down on Kerouac’s grave in Lowell, Massachusetts.  Which I’ve done.  Twice.

Jerry Cimino also honored me last year when he let me have my San Francisco launch of BOULEVARD at the museum.  This year will be even better, since I’m launching BEAT, which is set in San Francisco, from the Beat Museum, the night before Bouchercon.

Can you beat that?

When I saw Jerry last week I read a section of my book to him, which includes the following lines:  “They passed the Beat Museum with its mural of Jack Kerouac and Neal Cassady standing arm-in-arm.  Hayden saw a man inside waving a copy of Allen Ginsberg’s Howl before a group of Japanese tourists.”

When I asked Jerry to send me a few photos for this blog, he sent me this one, which was taken at an event two years ago… 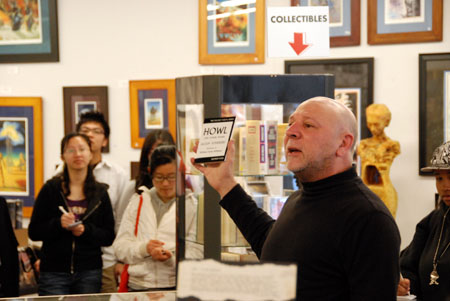 Come on now.  I knew nothing of this event.  The book I referenced in my excerpt could have been anything, I could’ve written that he was waving a copy of On the Road or Naked Lunch.  I could’ve said the tourists were from Sweden.

Is this a sign of some sort?  Am I supposed to drop everything and move to San Francisco, work the register at the Beat Museum for the rest of my life?

When you’re channeled into the Beat thing, well, shit like this just happens.  I invite you all to join the ride.  Get on the bus.  Drink the Kool-Aid.

Everyone who’s going to Bouchercon is invited to join me at the Beat Museum for the SF launch of BEAT on Wednesday, October 13, 2010, at 7:00 pm.  We’re going to have a nice crowd of Bouchercon attendees, and we’ll hit the North Beach restaurants and bars directly thereafter.  Special Guest Kim Dower (Kim-from-LA) will be reading from her newly published book of poetry as well.  Kim is a wonderful poet and the Beat Museum is a perfect venue for her.

And next week BOULEVARD comes out in trade paperback, with a fancy-schmanztie new cover.  Tell the friends, and thanks! 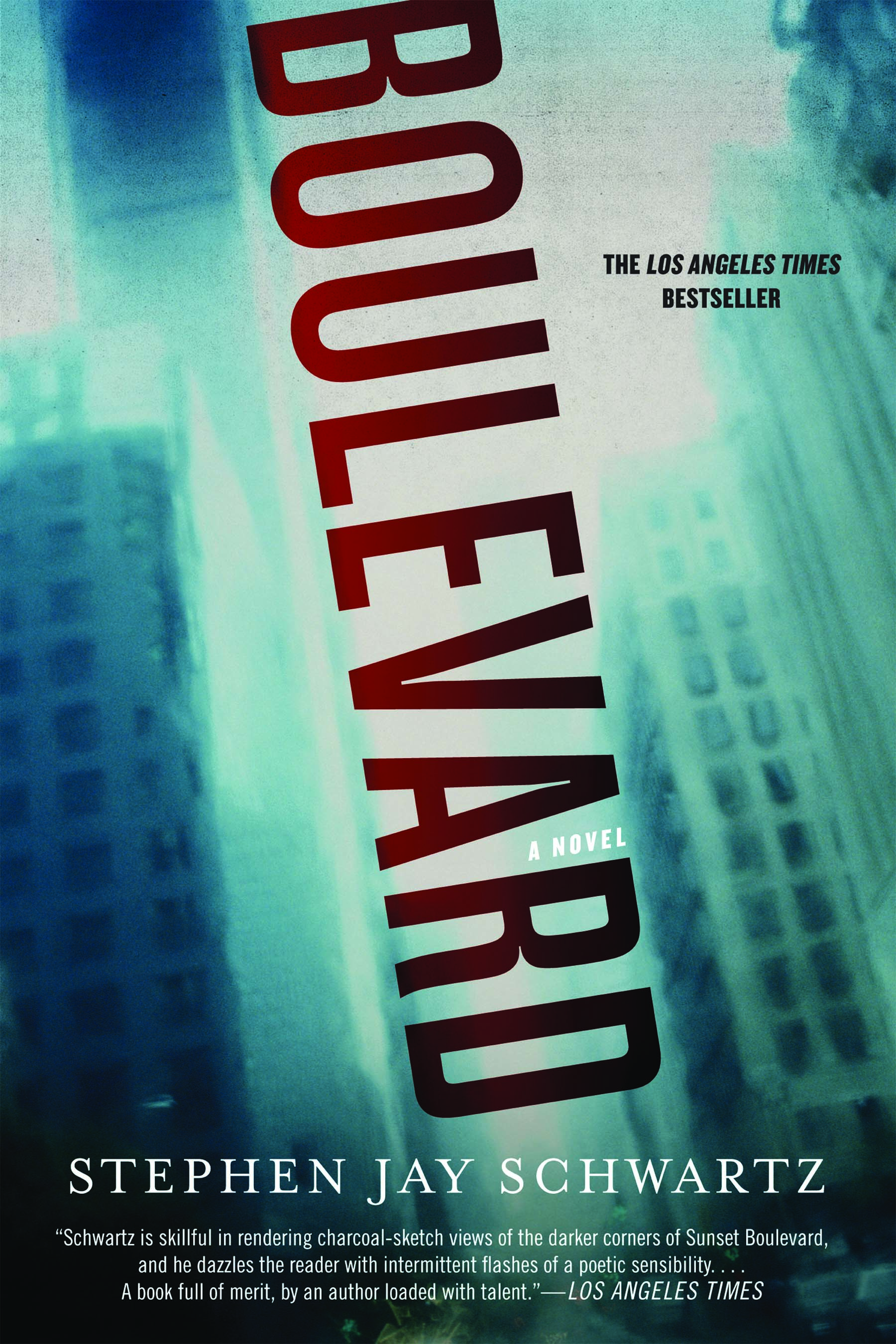