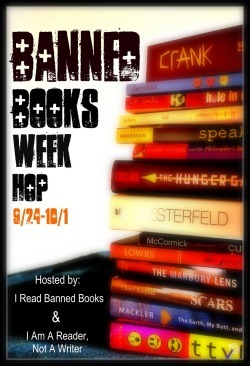 I rarely write dual posts here and at my other blog, Murder She Writes, but I’m making an exception because yesterday launched Banned Books Week.

You can read the original post here, which also lists the prizes and blogs participating in the Banned Book Blog Hop — well over 200 of us! (To win my prizes, you have to comment over there, but you have all week to do so!) However, I’ve updated and expanded the original blog just for Murderati readers 🙂

From Ray Bradbury and FAHRENHEIT-451 (one of my all-time favorite books):

“Somewhere the saving and putting away had to begin again and someone had to do the saving and the keeping, one way or another, in books, in records, in people’s heads, any way at all so long as it was safe, free from moths, silverfish, rust and dry-rot, and men with matches.”

I’ve always found it ironic that a book about the tragedy of book banning (through the total physical destruction of books-fire) has been banned by different people for different reasons.

Parents should be the arbitrars of what their children read. If I, as a mom, ban a book from my house, that is my right. One of leaders of the Banned Book Blog Hop, “I Am A Reader, Not A Writer” said, “All books have their place, but not all books belong on every shelf.” I wholeheartedly agree.

In a free society, no one has the right to ban a book for ALL.

The ALA has a list of the 100 most challenged books in the past decade, and the Harry Potter series tops the list. And we’ve all heard about the controversy surrounding Mark Twain’s classic THE ADVENTURES OF HUCKLEBERRY FINN (#14), Laurie Halse Anderson’s SPEAK (#60), and ARE YOU THERE GOD? IT’S ME, MARGARET by Judy Blume (#99.) And classics like ONE FLEW OVER THE CUCKOO’S NEST, TO KILL A MOCKINGBIRD, CATCHER IN THE RYE, and THE GIVER have been on the controvery lists for a long time. (Though I never really understood why.)

But there are some books that you may be surprised are on the list. The Captain Underpants series (#13) (a fun cartoony comic-style book that is perfect for little boys. Yes, there is potty humor. I have two boys and a husband. They all love potty humor.)

Or Eric Carle’s DRAW ME A STAR (#61) (ages 4-up), which was objected to because it relates loosely to creationism. (THE VERY HUNGRY CATERPILLAR is still one of my favorite early children’s books–Carle is an amazing and inspired artist and storyteller.)

But maybe the series that stunned me the most was the Junie B. Jones series (#71) by Barbara Park. I’ve heard that some people have issues with Junie’s grammar, but she’s either in kindergarden or first grade, and speaks how most of the kids that age speak. They’re fun, they teach a lesson in a fun and age-appropriate way, and they are great for early readers giving them confidence to read chapter books because they’re simple without being stupid. I love the series and have bought all (or nearly all) of them for my youngest daughter.

Benjamin Franklin said, “Those who give up essential liberties in order to protect a little temporary safety, deserve neither liberty nor safety.”

The First Amendment, as is the entire Bill of Rights, is the foundation of our essential liberties. Books are truly the permanent, enduring foundation of free speech. Our military men and women have fought and died for more than two hundred years to protect our freedoms–freedoms many of us don’t think about, or take for granted.

These are countries where government bans books and information.

Censorship is not a liberal or conservative issue. Banning books and ideas affects the left and the right equally.

But it all starts with banning one book.

What’s your favorite banned book? I have many, but FAHRENHEIT-451 by Ray Bradbury is one of my all-time fave books. For little kids? It would have to be Junie B. Jones. I read all of them to my youngest daughter when she was 6 and 7 (or she read them to me!)

How many of the banned books have you read on the ALA most commonly challenged books? In my lifetime, I’ve read 37 (books or series) of the 100.

And if you get a chance to head over to Murder She Writes this week, comment there and you are eligible to win one of many, many prizes, including an advanced copy of my next Lucy Kincaid book, IF I SHOULD DIE.

Go read a banned book. It won’t kill you. I promise.