This author life takes you into some weird places. One place I never thought I’d end up is on Court TV. But this week I did a segment for that show, with two of my favorite mystery authors, Margaret Maron and Sarah Shaber – we were interviewed discussing a recent, notorious arsenic poisoning case, which I really have to share with you.

Here’s the story, ripped from the headlines:

In 2000, Eric Miller, a 30-year old pediatric AIDS researcher at UNC Chapel Hill with a lovely wife and one-year old daughter, went out bowling with three other men, including Derril Willard, Miller’s wife’s supervisor at Glaxo Smith Kilne laboratories in Raleigh. The four shared a pitcher of beer, after which Miller complained of stomach pains. He kept bowling, but later that night was in such pain that his wife, Ann Miller, took him to the hospital, where he was kept overnight. Miller was released from the hospital, but continued to sicken, and died a few days later.

An autopsy revealed significant levels of arsenic in his system.

Now, apparently arsenic is not just a powerful, if illegal, pesticide, but also historically a popular spouse removal compound in North Carolina, and so there’s actually a state law that any arsenic poisoning that a hospital comes across must be turned over to law enforcement for investigation, as this case was.

– phone records that showed over 50 calls between Ann Miller and Derril Willard (also married, also with a baby daughter) in the two weeks before and after Eric Miller’s death and

– e mails on both parties’ hard drives at work that strongly suggested a “romantic relationship” between the two.

Police went to Willard’s home to question him, and after they left, he shot himself to death.

That’s not too vague, right?

Now, that week, before the questioning and suicide, Willard had hired a prominent attorney, and had apparently implicated “a third party” in the death of Eric Miller. The police not unreasonably suspected the widow Miller had some part in this whole tragedy, especially, let’s face it, considering that for hundreds of years arsenic has been the murder weapon of choice for women who did not at the time have the option of divorce, and also, it had been uncovered that Willard had not been Ann Miller’s first infidelity, but that she had had at least two affairs since her marriage.

But – Willard’s attorney, Richard Gammon, refused to divulge what his client had confided to him on the grounds of attorney-client privilege.

Thus began a three-year court battle that worked itself slowly up to the North Carolina Supreme Court, over whether or not attorney-client privilege extends beyond death.

Finally, the NC Supreme Court ruled that since the confidences of Willard neither implicated him in the murder nor jeopardized his family nor his estate, that the attorney, Gammon, was compelled to divulge Willard’s statements.

And Gammon’s statements revealed that Willard had confided that Ann Miller had injected arsenic into Eric Miller’s IV while he was in the hospital.

Meanwhile, Ann Miller had moved to Wilmington, on the coast of North Carolina, and married a Christian rock musician (somehow I especially like that part).

Now, even though Gammon’s recitation of Willard’s statements was hearsay, it was damning enough to arrest Ann Miller on $3 million bond. She had engaged the top defense attorneys in the state, Wade Smith and Joseph Cheshire. And finally in 2006, after negotiations with the state prosecutor, she pled guilty to second degree murder and received a sentence of twenty-five to thirty-one years, which she is currently serving.

Now, this whole story is one of those that, as a mystery writer, you read and think – “WOW”. And then – “No way. No one would ever believe it – it’s almost too – TOO.” But then as you keep reading, it sort of works on you.

I mean, first of all – WHAT WERE THEY THINKING?

Okay, so there was a hot affair (at least I hope so, sheesh.). But, um, why in the name of heaven did they feel they had to kill this guy? This was the year 2000. Raleigh’s a blue city. These were educated, well-employed people. Wasn’t divorce invented so women wouldn’t HAVE to kill their husbands?

And I haven’t dug so deep I can confidently answer this, but there really doesn’t seem to be a money motive.

So – what? It was pure lust? Pure, murderous lust? Or maybe this is me, but I keep thinking that both of these people had very, very small children. Were the stresses of early parenthood so great that they went a little, well, insane? And could only think of the most direct way out?

Certainly they were not thinking this thing through. At all. They were having an affair, not covering their phone or e mail tracks, and POISONING HER HUSBAND. Over a period, of, it’s been speculated, looking at the levels of arsenic in Eric Miller’s body – months. Maybe as long as six months.

Were they sociopaths, just unable to think of anything but their own immediate gratification? Narcissists, thinking they couldn’t be caught? Just plain lazy, thinking arsenic was easier than lengthy custody battles? Was she an evil and hypnotic Black Widow who lured men to their deaths? (Apparently the lead police investigator called her “mesmerizing.”)

And, let’s just consider this. The new husband? The Christian rock musician? He marries a woman suspected of multiple infidelity and poisoning her first husband?

And oh, even better in some ways – when the police come to arrest Ms. Miller-Kontz– she has a new job at…. A pharmaceutical company.

A suspected poisoner. At a pharmaceutical company.

I just don’t get it. Really. On any level.

But I think it’s stories like this that might make us into mystery writers, and readers. Because the really frustrating thing is that – we’re never going to know. This whole mess will remain a mystery. On the other hand, the ironic and truly satisfying thing about a mystery novel is that at the end – it’s not a mystery at all, anymore. Everything has been examined, clarified, and revealed. You know EVERYONE’’s motivation. You understand EXACTLY why, how, and when things happened, and in what order. It is such a relief and release to KNOW. So very much more satisfying than life.

I’m sure I’ll use some piece of this case in my own work, eventually. It will probably be something about the daughters. (Can you imagine finding out that your mother poisoned your father? Or that your father killed himself after he’d helped poison his lover’s husband?)

It won’t look anything like reality, but I can feel it in there, like a grain of sand… waiting to be layered into a pearl.

And so, if you’re inclined… how would YOU treat this story, or like to see it? A thriller? A comedy? THE POSTMAN ALWAYS RINGS TWIICE, or TO DIE FOR? Whose POV would you tell it from?

And for the love of God, Montressor… tell me WHY.

@bradmeltzer This makes me want to be tiny.

I love storytelling and feel blessed to make a career doing what I love. And after 38 books? I think this is one of the totally coolest things I've read .... @amleestories @MacmillanAudio 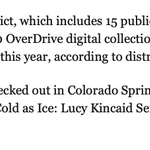 @mariskreizman This tweet reminded me to buy a weighted blanket to be delivered on Monday.