Due to numerous ungodly demands, I’m unable to do justice to a new post this week, but in celebration of the award nominations — including the Edgar and the Agatha to date — being extended to Books to Die For, the compendium edited by John Connelly and Declan Burke, I thought I’d offer it again. For those of you who haven’t yet picked up this book, it really is an indispensable guide to crime fiction by the women and men who love it so much they write it. 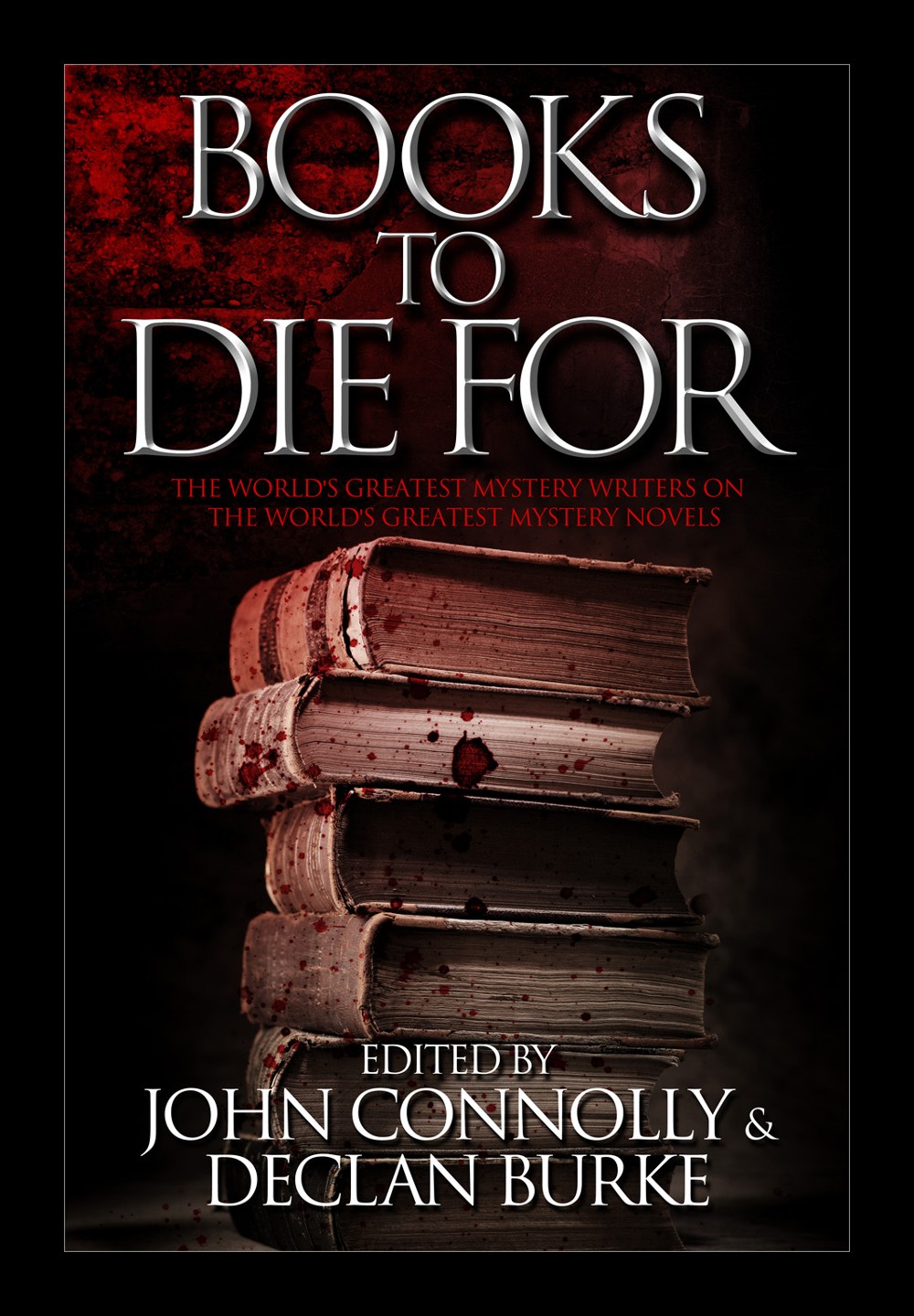 Last year, John Connolly asked if I wanted to take part in an anthology he and Declan Burke were planning, with the invaluable aid of Assistant Editor (and esteemed Answer Girl) Ellen Clair Lamb.

The premise: Ask some of the best crime writers in the world today what book within the genre—whether a classic, a modern masterpiece, an overlooked gem, or a long-forgotten pulp—most influenced them, inspired them, or otherwise led them to want to shove a copy into the hands of every unsuspecting reader they came across.

Compensation: A pittance, or a bottle of whiskey—Midleton Very Rare Blended Irish Whiskey, to be exact.

Guess what my answer was—both as to whether I wished to join the scrum and what form of compensation I preferred.

Turns out, I was in excellent company.

The result: Books to Die For, a compendium (love that word) of almost 120 pieces from writers around the world that hit bookstores in the U.S. yesterday. (It came out in the U.K. last month.) 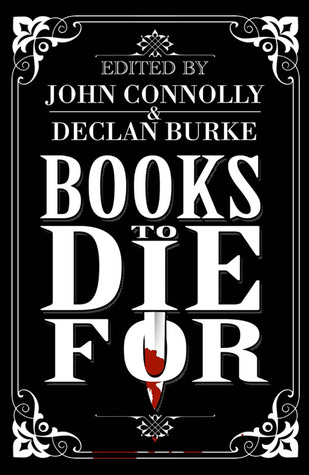 It’s truly a must-read for the crime aficionado on your Christmas list—or, as John and Dec put it perfectly in a word of appreciation sent out to the contributors:

Quite frankly, we don’t think there has ever been a line-up quite so starry in any previously published anthology, and the quality of the contributions was exceptionally high. In the end, the book functions not only as a reading guide, but as an overview of the genre.

That’s an understatement. Treated to my own copy, I’ve been reading the entries and marveling at the books chosen, the insights and historical perspective provided (the books are arranged chronologically), as well as the personal statements of awe and fascination and devotion—even envy.

To give you some idea of who some of the contributors are, just check out this list of those attending the promotional event at Bouchercon (Friday afternoon at 4:00 in Grand Ballroom A of the Cleveland Marriott Renaissance):

For a complete list of contributors and the books they chose, as well as Bonus Materials from some of us who had other books we wanted to champion but space would not permit—the book already clocks in at an impressive 730 pages—check out the Books2Die4 website.

Some of the entries are gems of critical appreciation. Some read like fan letters. Every single one I’ve read so far has taught me something I didn’t know.

Karin Slaughter selected Metta Fuller Victor’s The Dead Letter and makes an airtight case that the overlooked Victor—a woman writing voluminously in the mid-to-late nineteenth century—was far more influential to the subsequent development of the genre than Edgar Allan Poe:

Victor’s novels were not driven to immediate climax, but filled with reversals, twists, and misdirections that both prolonged the denouement and arguably made the climax that much more rewarding. Victor didn’t just set out the facts of the crime: she explored social mores, distinguishing between the upper and middle classes with a subtle reference to clothing or manner. She described atmosphere and scenery in careful detail, giving her stories an air of grounded reality. The characters in Victor’s books were not cynical about crime. They felt loss and tragedy to their very core. For these reasons and more, it seems that the Victor formula, not Poe’s, is the convention to which modern crime fiction more closely hews.

Megan Abbott makes a similar argument for Dorothy B. Hughes’s In A Lonely Place—“the most influential novel you’ve never read”—a serial killer tale from the murderer’s point of view that preceded Jim Thompson’s The Killer Inside Me by five years.

Hughes hoists her killer on the autopsy table, still breathing, and shows us everything he doesn’t want to see about himself: the twin arteries of masculine neurosis and sexual panic that drive his crimes. It turns out that Hughes is up to much more than telling a killer’s tale. Through her dissection, In A Lonely Place says more about gender trouble and sexual paranoia in post-World War II America than perhaps any other American novel.

Two of my favorite entries were written by my fellow Murderateros Martyn Waites and Gar Anthony Haywood.

Martyn selected Always Outnumbered, Always Outgunned, a book he routinely recommended to the inmates he tutored at one of Her Majesty’s prisons. It’s the first Socrates Fortlow novel from Walter Mosley, a series often overshadowed by the Easy Rawlins monolith. When my late wife read this book, she forced it on me with the same enthusiasm Martyn does, saying, “This isn’t like a crime novel. It’s like a myth.” Here’s how Martyn puts it:

It’s no accident that this lead character has been given the name of Socrates, the father of Western philosophy. Written in the aftermath of the L.A. riots and the Rodney King beating, this hulking ex-con becomes a contemporary inquisitor, asking difficult moral questions of a society that has retained a dogmatic grip on the letter of the law but has lost purchase of its fair and compassionate spirit.

Gar selected Richard Price’s Clockers, a book I often go back and re-read. Gar’s entry brings in his father, and I always enjoy reading Gar discuss his dad. It turns out that Gar lent his father a number of top-tier crime novels, but only one “blew him completely away.”

“This guy’s the real deal,” he told me when I asked him what he thought. And coming from my father—a man of few words if ever there was one—this was high praise, indeed…. Reading it from a writer’s perspective, you’re immediately struck by the vast array of skills Price has on display: plotting that moves at optimum speed, characters that live and breathe, dialogue devoid of a single false note. And this last is no exaggeration: every word of every line Price’s people speak in Clockers rings true. Every one.

My own pick was James Crumley’s The Wrong Case, and it pairs with Dennis Lehane’s appreciation of The Last Good Kiss. Of Crumley’s ability to make even the absurd seem not just believable but necessary, I wrote:

He set a tone that kept you off-balance, a tone that blended a kind of sly irony with heartsick desperation, an understanding that the battle for the good is fought by ingeniously flawed men doing the ridiculous in the service of some angry, inscrutable truth.

The anthology is full of gems, each only a few pages long, so it’s easy to wrap one up in a brief sitting and move on to the next, or wait to savor it later.

Speaking of savoring it later: I haven’t tried the whiskey yet, saving it for some special occasion over the holidays. But it’s from County Cork, where William Augustus Corbett and his bride, Katie, spent their lives before sailing to America in 1882. That alone bears promise.

So, Murderateros: If asked to name just one book in the genre that had an overwhelming impact on you, which one would you choose—more importantly, why? (Feel free to add your remarks to those of others on the book’s website.)

Final Note: John will be touring to promote the book, and a select group of booksellers will have copies signed by various contributors. For where to find John or one of those copies, go here.

Jukebox Hero of the Week: In one of my very first author appearances (with Laurie King and Michael Connelly), I was asked a question similar to the one asked of me by John and Dec for Books to Die For. But I didn’t name a book or a writer. I admitted that I was probably far more influenced by this man than anyone I’d ever read, specifically this song:

11 thoughts on “And the Nominee Is: Books to Die For”