Hi there – I’m the Second Murderati New Arrival, Jonathan Hayes. Technically, I’m John Hayes, but so is my father, so everyone except for telemarketers and pollsters has always called me Jonathan. And lots of people also call me “Jaze”, after an old email address. I’m not picky – I’ll answer to anything.

I’m going to softball my introductory post – in the months, years, millennia to come, expect some forensic stuff, some writing stuff, some musings on the sweet mysteries of life, etc., but my first Murderati entry is just going to be a gentle “Getting to Know You” thing.

Mostly because I’m feeling a bit burnt out – it’s been a rough few weeks here at Stately Jaze Manor. My cat Bates died last month, which was surprisingly painful, and when I got back from my tour for A Hard Death, Petey, my back-up cat, welcomed me by developing a urinary blockage. I don’t propose to dwell on my cat’s urinary tract health (“my cat’s urinary tract health” – is there a more American phrase?), but suffice it to say the last fortnight started with fervent prayers for cat piss, then rapidly devolved into a blur of taxis, vets, animal emergency rooms, horribly invasive manipulations of poor Petey’s naughty bits, and salty tears as I watched the zeros line up on various cash registers (so far, we’re in for about $6,000. My friend Sue, an old medical school chum in London, tells me that’s more than the National Health Service charges for a heart transplant – a human heart transplant.)

Anyway, Petey’s back home now, and peeing, sort of, so I’m coming up for air, and writing my softball introduction.

I found Gar’s journey through the Vale of Publication really riveting – it’s great to hear an experienced writer talk about the ups and downs of life in the biz. Alafair interviewed me here before A Hard Death came out, so I don’t think there’s any need to go over my Epic Origin Story again.

In brief, I am a forensic pathologist; for the last 15 years, I’ve had a second career as a freelance food and travel writer, before switching to thrillers, starting with Precious Blood in 2007.

Forensics still takes up the majority of my time. There are about 500 Board Certified forensic pathologists in the USA, which is too few for such a vast expanse. The upside of this situation is excellent job security (unless you’re an epic screw-up – and there are a few out there). The downside? The quality of medicolegal investigation in this country is spotty at best.

I’m likely, then, the only forensic pathologist that you know. (I’ll get into what forensic pathologists are in a later post, and, also, what separates them from coroners.) The combination of our often high-profile work and our real world rarity has made us a fairly exotic species: if you turn on a TV, you’re almost sure to land on a forensic show – CSI, NCIS, various reality shows, etc. Indeed, a couple years back, a glossy magazine pronounced forensic pathologists “the new Super Models”. So, yes, a sexy, glamorous profession that has caught the public’s eye in recent years.

The reality is that forensic pathology is tough. It’s hard work – physically exhausting, intellectually demanding, emotionally draining. And staying in general pathology is far more lucrative than specializing in forensics – after all, state and city governments are not known for their largess, even at the best of times. The thing is, at the end of the day, forensic work is really fascinating stuff; not a day goes by when I don’t learn or see something i’d never known or seen before.

I live and work in New York City. Ours is a large, busy office, and I think that we’re just about the best in the country. Of course, I don’t doubt that other offices think that they’re the best, but that just makes me nod and smile indulgently.

We have almost 30 pathologists staffing five offices (one each in Manhattan, Brooklyn, the Bronx, Queens and Staten Island), which means that cases are managed expeditiously and thoroughly. Usually, the work day is 8AM to 4:30PM, but if there’s a mass fatality incident, for example, the hours instantly elongate. I’ve done autopsies at all hours of the day and night, typically after things like plane crashes. We try to avoid this, because when you’re exhausted, your judgement becomes impaired. And when you do things in the middle of the night, under pressure, without adequate support staff, the chances of a screw-up increase; the JFK autopsy, for example, was done well after normal business hours. One understands the huge pressures the pathologists were under, but that autopsy has been torn apart, time and again, and one can’t help but wonder whether things might have gone more smoothly if they’d waited to do the autopsy under normal circumstances in the full light of day.

So, yes, fairly regular days. Our facility is open seven days a week – another luxury of having a big city office – so I work quite frequently on weekends and holidays. I’ll get more into the nuts and bolts of what we do in later posts, but for now, here’s where I spend most of my days: 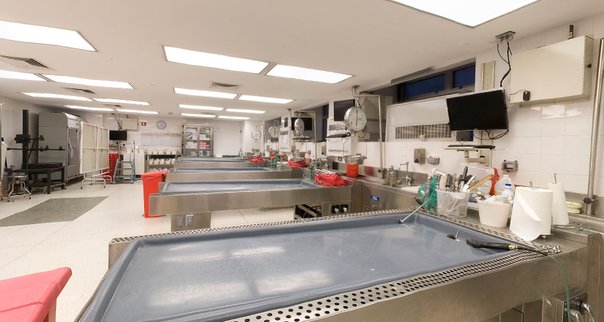 This is the main autopsy room in the Office of the Chief Medical Examiner (OCME) in Manhattan. There are eight autopsy tables here; the perforations alongside the tables create negative pressure, hoovering up any potential pathogens that might be released during the procedure. Next to each table is a scale, for weighing organs. This photo is a still image from a kind of cool New York Times panoramic image – if you click on this photo, it’ll take you to the original, and you can gaze at your screen as the image pans vertiginously around the autopsy room.

I live in Downtown Manhattan, near Union Square, a 25 minute walk from my office, which I love – both the walk, and getting the distance from my office. My apartment is a small loft, converted from an old brick warehouse that was originally built to house carriages and stable the carriage horses. I have high ceilings and great light, and, most precious of all in Manhattan, real tranquility.

Which is important, because I write mostly at home. I write in bed, formerly surrounded by cats, now abutted by cat. (I got the owl from an old girlfriend, a piece of Victorian taxidermy she’d inherited from her grandmother.) 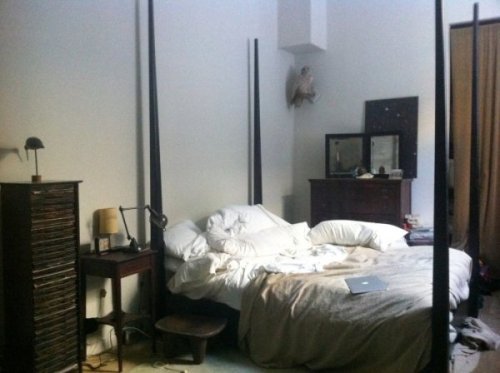 Actually, mostly, I write the first draft in bed: when the deadlines become crushing, I move to my living room table. I find the cold, industrial aluminium chairs (from an insane asylum upstate) help me concentrate on writing.

When I absolutely, positively have to buckle down and get a draft done, I go to the Writers’ Room. It’s a cooperative space on lower Broadway, with cubicles, wifi, Lexis-Nexis access and Silence Nazis – seriously, you get fined, like, $100 if your cell phone rings. The gulag feel is perfect for finishing a book, plus it’s fun to watch liberals behave like fascists.

My final writing place is in Paris. A Francophile all my life, I finally broke down and bought a tiny (250 sq ft) attic apartment in the Marais, the city’s medieval center. I know this is going to sound insane, but, between my tight schedule and my v. French contractors and the standard disasters that accompany working on a 200 year old building, I’ve been renovating this miniscule studio for over 3 years. It’s under the eaves, with big French windows that open onto a stunning view. Most important of all, it has a diminutive elevator! A real find, since elevators are very rare in this arrondissement, where the streets are so old that they’re designed for horse-drawn carts. My dream is to write in Paris instead of the Writers’ Room, but so far, the only thing I’ve written here has been huge checques to various contractors. 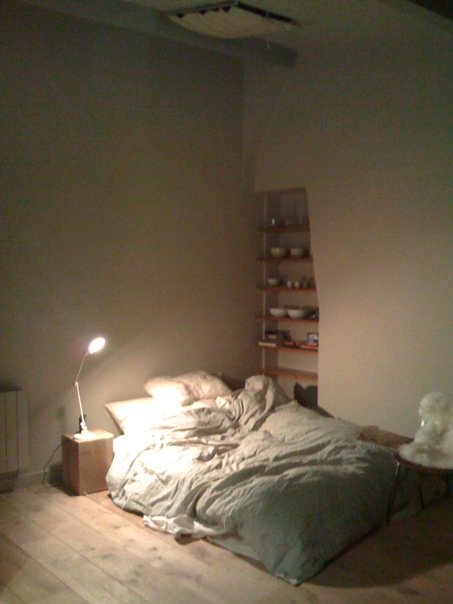 Really, it is very lovely, and I hope to visit it someday.

OK, so I’ve bounced about inside this blogging software, and posted a few photos, and stuck in a few links; I think I have a rough sense of how this all works, so I’m going to stop here.

I’m looking forward to getting to know everyone. I won’t be talking about my own cases (for obvious reasons), and I won’t really be commenting on other high profile cases (actually, I will have something to say about the Casey Anthony case, but not about the forensics).

Oh! You should friend me on Facebook – I post the best stuff, if I do say so myself. Or at the very least, follow my Tumblr, which is mind-blowingly phenomenal, if occasionally Not Safe for Work. Or don’t – but if you choose not to, just know that you’ll be constantly missing out…

38 thoughts on ““Allow myself to introduce… myself.””