The arrival of autumn has put me in a mood of mellow introspection. I think I’m going to go ahead and launch a project I’ve had in the back of my mind for some time: The Bestiary of Death. Bestiary will be a monthly 5 minute or so audio podcast (maybe video, eventually) about a forensic topic – rigor mortis, say, or Jonathan’s sense of blood. It’ll be factual, but it’ll also be impressionistic, tinted by my own reactions and experiences. It’ll showcase my delightful speaking voice, plus feature groovy cover designs. I’ll let you know more about it as my plan solidifies.

Someone asked me the other day what I’ve learned from my time as an M.E. – actually a fairly pointless thing to ask a resolutely non-spiritual person. I do think that Warren Zevon’s answer to Letterman asking him what he’d learned from life (“Enjoy every sandwich”) covers it nicely, but I also have been thinking lately about achievement.

Objectively, human endeavor has delivered many astonishing achievements – the elucidation of the structure of DNA, putting a man on the moon, Sofia Vergara – but most of these things seem like almost inevitable byproducts of history. Sooner or later, we’d have figured out the wheel, and iron, and the Butterfinger bar. I feel the same way about personal achievement. Maybe because I have a doting mother and a competitive father, most of the things I’ve done with my life – becoming a doctor, becoming a forensic pathologist, writing for magazines and newspapers, becoming a novelist – don’t feel like achievements so much as they feel like stages of a life.

But Xevious? Xevious was an achievement. 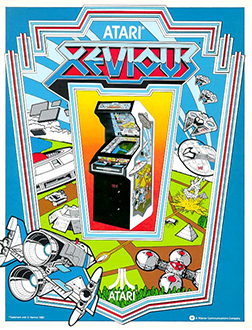 I first encountered Xevious, an early 16 bit Namco videogame, in a Leicester Square coin arcade in the early 1980’s, while I was in medical school at the University of London. It’s a vertical scrolling spacecraft game in which you pilot a craft over a foreign terrain, bombing structures on the ground below while fighting off ferocious air attacks. The graphics – risible in the age of the Playstation 3 and Xbox 360 – just blew me away. To play Xevious in1983 was to really embrace the cutting edge of technology, to experience the joy of becoming cyborg, part man, part machine. At least, for as long as you could make your ten pence last.

At first, I was mediocre – much as I love them, I’m not intrinsically a good videogame player. But over countless hours of gameplay, I got better, and eventually I edged my way onto the leaderboard, and finally experienced the satisfaction of using the joystick to type out JAH into a Top 10 slot. Gradually, other arcade players gathered to watch me fly my solvalou spacecraft through the Baculon resistor shields, a barrage of slowly rotating metal slabs the size of skyscrapers you have to dodge to strafe and bomb the buildings below. It was an exhilarating experience, for I’d always been the admiring onlooker, never before the admired player.

The summer of my Year of Xevious, I traveled a lot. After finally entering my initials at the very top of the Xevious leaderboard in London, I flew home to Boston, where I sought out an arcade,  and found Xevious. I banged out my initials there, too, and again, in Philly. Now I had my name right at the top on Xevious games in three major cities; I also had calluses on my knuckles from repeatedly smashing them against the smooth bolts that held the joystick to the cabinet.

A week later, I went on to Bangkok. I knew Bangkok quite well, but wasn’t sure if I’d find a Xevious there. Imagine my surprise, then, when I discovered one in my hotel lobby. But it wasn’t the upright arcade cabinet I was used to: the BKK incarnation was a bar table version, played seated at a video screen covered with a sheet of glass.

Watching the young Thai dudes play, I experienced the rush of derision known only to the superb player – these guys were pathetic, dying off while they were still around the 40,000 mark! My top scores? Well, they were in the high 180’s, low 190,000’s – enough to justify that blast of disdain for lesser players, a fresh and exciting sensation for me.

They pretended not to see me waiting my turn for a long while, but ultimately they could ignore my hulking presence no more; finally, the crowd parted, and I got my shot at the machine.

I didn’t know how I’d fare on this low screen – I’d never played sitting, the way these kids were doing it. And I wasn’t about to start: I grabbed the chair, and shoved it away. I accidentally pushed it harder than I needed, and it shot a good fifteen feet across the lobby.

Immediately I was someone to be reckoned with. When I stepped close to the table, the throng closed in around me. When it became apparent that I was going to play the game standing, the hum of excited conversation grew loud. Would this unlikely-looking, chair-flinging farang be any good at the game?

Well, yes, actually. I played calmly and aggressively, piloting that spaceship like no one there  had ever piloted itbefore. Waves of sparkly diamond rockets fell to my guns, I reduced the missile and fort installations hidden in the woods below to charred pits. None of the players there had ever even seen the second wave of Baculon resistor shields, let alone the ancient Aztec-style carvings on the plains beyond.

I was too tall for the game table; hunched over, banging and mashing, dodging and decelerating, I took that fighter ship way further than anyone ever had, but, my back fully locked by muscle cramps, I finally crapped out; when my last ship was destroyed, I had earned just over 150,000 points. A loud “OHHHH!” went up from the crowd.

The leaderboard screen came up onto the console, the Number 1 slot occupied by some guy with a measly 47,000. I wasn’t proud of my score, and felt a little awkward in the hot press of bodies, so I straightened with a casual shrug, and pushed my way out of the scrum without entering my initials. There was another roar as the crowd sealed behind me, the players determined to go further now that I’d shown them all what time it was.

I didn’t play Xevious again until I traveled to West Berlin, a few weeks later. In the morning, I crossed through the Wall to visit the East part of the city. I ate venison in a gloomy old restaurant, supposedly the city’s best. But I loathed the oppressive, monochromatic dullness of the East German half of the city, and quickly made my way back through the drab, rainy streets to West Berlin.

Back in the American section, I found a bar near Checkpoint Charlie, and ordered a Coke. The lights were low, the crowd mostly soldiers, and the music was expat-oriented Classic Rock. I sipped my Coke, sitting there happy to be people-watching back in the Capitalist world.

And then I saw it in the corner: a Xevious machine.

I hadn’t played since Bangkok. I finished my Coke, got change for the machine from the barman, then headed over. I slotted in a coin, the screen lit up and the familiar opening chimes sounded.

And I started to play.

It took me a couple of seconds to lock into my groove, but once I did, I was on fire. On fire. Nothing could touch me – not the ground fire, not the crystal rockets, not the Baculon resistor shields, not even the random exploding cannonballs that are the lethal outriders of the Genesis mothership. I played on and on, taking the thing further than I’d ever gone, seeing forests and lakes and Aztec carvings I’d never before seen.

It was amazing. Off-duty soldiers gathered to watch me play; I barely noticed them, for I was now truly fused with the machine, the joystick an extension of my wrist, the BOMB and FIRE buttons my new fingertips.

On and on I went, shattering all my previous records.

And then something magical happened: my favourite song of the era, David Bowie’s “Heroes” came onto the radio. But it wasn’t “Heroes” – it was “Helden”, the German version. And I kept playing and playing in the shadow of Checkpoint Charlie, Bowie screaming in German about the guns going off by the Wall, a crowd of GI’s cheering me on.

My right wrist felt wet; a quick glance showed me I’d played so hard that my knuckles had torn open. Blood was dripping onto the console, smearing down my wrist and arm, flicking up onto my clothes as I slammed the joystick back and forth.

And I just kept going, and going, and going, moving forward slick with blood, tears streaming down my face, Bowie singing that we could steal time (just for one day), the sensation in my heart of escape from oppression while in my head I knew I was still right in the middle of of it, a few yards from the Wall, the barbed wire and spotlights and machine guns that separated freedom from asphyxiating totalitarianism.

And I went on, and on, up past 200,000 and on. I floated up through the tropopause, all the way out into the mesosphere, where around me comets burned up into streaks of pure white light. And still I kept going, on into the thermosphere, surrounded by the shimmering curtains of the aurora borealis, where the 3,000 degree air temperature felt cold against my skin.

I went on and on, and in the end, I never stopped.

There’s a theory that since energy is never destroyed, sound never ends; the sounds of the musicians playing on the deck as the Titanic sank are still echoing around that ship, just infinitely quietly. In the same way, thirty years later, somewhere deep inside, a part of me is still playing Xevious in that bar, still piloting that ship further and further out as David Bowie sings that we could be heroes, if just for one day.

So, yeah, Xevious. Xevious was an achievement.

And that’s what I have to say on the subject of achievement.

And thanks for playing along at home.