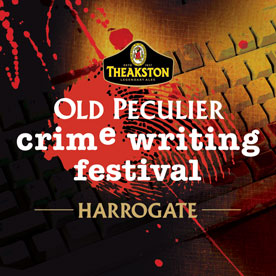 By the time you read this, I’ll be in Harrogate for the Theakstons Old Peculier Crime Writing Festival. Harrogate is now in its seventh year, and is one of the largest of its kind in the world. It’s very different from the US conventions I’ve attended, as you have to be invited to take part on one of the range of panels, and only one panel track is run at any one time, ensuring large capacity audiences. Fortunately, as the whole thing is professionally miked and lit, you can’t see much beyond the spotlights anyway when you’re up on the stage, which tends to help authors who are a little shy or not used to performing in front of so many people.

Harrogate also differs from many conventions in that you can buy tickets for individual panels, as well as weekend rover passes, although many people never quite manage to make it out of the bar. However, I’m sure the prospect of listening to Lee Child, George Pelecanos, ‘The Wire’ creator David Simon, Mark Billingham, Christopher Brookmyre, Ken Bruen, Allan Guthrie, Stuart MacBride, Denise Mina, Andrew Taylor, Martyn Waites, Caro Ramsay, Chris Simms, Val McDermid, Laura Wilson, NJ Cooper, etc, will be more than enough to ensure packed houses for every event.

Among the silly things I’ll no doubt be doing over the weekend, I’m giving a workshop as part of the opening day, Creative Thursday, on self-defence and writing action scenes. Andy, brave soul that he is, has volunteered to be my Crash Test Dummy for this. Practise for that quickly degenerated into undignified grappling and fits of giggles, I can tell you – there was a water pistol involved – but we shall endeavour to be serious on the day.

Other workshops taking place will be the Award-winning writer Laura Wilson talking to CSI officer Andy Manns; lawyer and crime author Martin Edwards will be unravelling the legal side of crime writing; exploring the structures of a novel from ancient to modern with crime author and Head of Writing at Liverpool John Moores University, Adam Creed; a discussion between author Mark Billingham, abridger Kati Nicholl, and actor Adjoa Andoh about adapting for audiobook; and finally the Dragons’ Pen.

This latter event gives would-be authors two minutes to pitch their story to a panel comprising top agents Jane Gregory and Philip Patterson, and editors David Shelley of Little, Brown, and Selina Walker of Transworld. A scary prospect indeed, but worth the risk to get your idea in front of such a line-up, even if there is the danger of crashing and burning in spectacular fashion.

So, I hope you’ll excuse the short post this week, and I’ll leave you with the question have you ever attended a writing workshop – either a course or a single day event? If not, what puts you off? And if you have, what did you gain from it? Is there one specific piece of advice that stands out?

Last week, of course, were the CWA Dagger Awards, held at Tiger, Tiger in Haymarket, London. I was nominated for the CWA Short Story Dagger for ‘Served Cold’, which originally appeared in the Busted Flush anthology A HELL OF A WOMAN, edited by Megan Abbott, and was published in the UK in THE MAMMOTH BOOK OF BEST BRITISH CRIME, published by Constable & Robinson. The worthy winner was Sean Chercover, for ‘One Serving of Bad Luck’ from KILLER YEAR, published by MIRA. Many congrats to him, and also to Colin Cotterill, winner of the CWA Dagger in the Library; to Fred Vargas for THE CHALK CIRCLE MAN, winner of the CWA International Dagger; and finally to Catherine O’Keefe, winner of the CWA Debut Dagger for the opening section of her novel, THE PATHOLOGIST.

This week’s Word of the Week is deprehend, meaning to catch, to seize, to detect, whereas apprehend means to lay hold of, to arrest, to be conscious of by the senses, to lay hold of by the intellect, to recognise or catch the meaning of, to understand, to consider, conceive or look forward to, and to anticipate, especially with fear.

14 thoughts on “A Peculier Crime”

@sarahstrohmeyer @stephycha I’m more intrigued by second word strategy. Go for it? Or a different 5 letter word? I do the latter. Can’t solve in 2 but usually 3, maybe 4.

@PTrebilcock @scalzi @LeeChildReacher Little known fact: Reacher refers to spending time with a Portland prosecutor named Samantha at the beginning of Bad Luck and Trouble. Way back when.

@BCDreyer I may feel differently tomorrow when the bee is less awful and wordle less delightful.

@BCDreyer Not long after I first started, I said the key was to stop at “minimal genius.” I was right but I can’t go back.