You’ll have to forgive me for failing to show up at my appointed time last week.  Thank you to Dusty for so graciously stepping in to cover for me.  That’s one of the many great things about Murderati.  You know you can count on your fellow bloggers to cover your ass.

Right now I’m lying in a little bedroom in Aina Haina, a suburb of Honolulu.  We just arrived today and I’ve eaten an amazing sushi meal and I’m feeling a little zoned out, partly from the food, partly from the time change (it’s much later for me than the clock says) and partly because I’m coming down from one of the most intense experiences I’ve ever had as a writer.

They always say that your second published book is the hardest book to write.  The reason, of course, is that when you writing your second book, life has suddenly changed for you and you have this little thing called a deadline to deal with.  That puts a whole new twist on the situation.  You’re no longer an apiring writer (although I’m not sure I like that term.  If you’re writing regularly, you’re a writer, published or not), they’ve just paid you a hunk of money and it’s time to get professional.  Meaning, get the book in on time.

Well, I’m here to tell you that your second book is nothing.  It’s your seventh book that nearly kills you.

(No, those of you keeping track haven’t miscounted.  I also write under a top secret pen name.)

After writing a draft of this current book very quickly, I was not satisfied with it.  I turned it in, got some much needed guidance from my editor, and just spent the last several months restructuring the book and adding some 30,000 words.  What I turned in on Monday is what I think is a much, much better book.  Hopefully my editor will agree.

I have to tell you that the task of fixing this book is probably the hardest I’ve ever worked.  I not only restructured, but the underlying mystery was changed, an entire subplot was scrapped and replaced with a new one, a new character added and a character who made a cameo in the original is now a major force in the story.

In other words, a LOT was done.  Not only were those 30,000 words added, but probably 50,000 were completely revamped on top of that.  In fact, there wasn’t a scene in the book that wasn’t changed.

Who ever said writing was easy?

So, now, here I sit, kicking back and taking it easy–or at least trying to.  Despite taking off to Hawaii for some much needed R & R, I’m having a little trouble winding down.  Although I have a feeling by tomorrow I’ll be doing just fine….

Anyway, no, not a lot to talk about — I’m all “talked” out right now.  But I am interested to know:

1.  What do you do to wind down after an intense period of work?

2.  Where is your favorite place to go to get away?

@ECLamb It’s been a while, but can confirm. 😏

@bcmystery Whenever in a pinch, just default to the old, completely inoffensive stand by: There once was a man from Nantucket...

Every Picture Tells a Story No. 3165: #photography #photos #inspiration

Plan Your Dream Reading Vacation in a Literary Airbnb https://t.co/nPqrnFqRMq (What great options!) 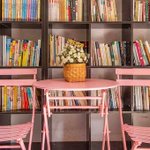 A cool and bright Saturday in Manhattan. Walking up Fifth to an excellent restaurant, listening to Jackie O Motherfucker, counting my blessings.

Jonathan Hayes on Instagram: “A cool and bright Saturday in Manhattan. Walking up Fifth to an excellent restaurant, listening to Jackie O Motherfucker, counting my…”

19 Likes, 0 Comments - Jonathan Hayes (@mybloodylife) on Instagram: “A cool and bright Saturday in Manhattan. Walking up Fifth to an excellent r...