I wrote my first ten books rotating between Starbucks, my favorite brewery, and my favorite bar & grill. The need to write outside the house was primarily because my kids were in the house, I had no private office, my desk was in the living room (read: the center of the Brennan Household) and I got little done at home. I can write with noise, no problem. I listen to loud rock music when I write, preferably with my iPod and earbuds. But I can’t write with interruptions. One? Sure. Three hundred an hour? Not so much. 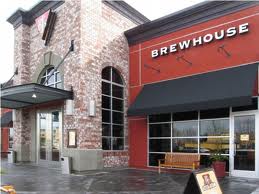 So I took my laptop and hit the caffeine bar, or when Starbucks closed I went to the brewery or BJ’s restaurant. Like Alex, I love writing on planes. I tend to get a lot done, I have no idea why. Unless the person in front of me puts their seat all the way back . . . I don’t like that.

BTW, BJs has the BEST margarita in the world, the “Rita-tini”, which they’ve taken off the menu and replaced with some awful, sweet drink called the “platinum margarita.” But they still make rita-tini’s for me 🙂

But then we moved and I had my own office. 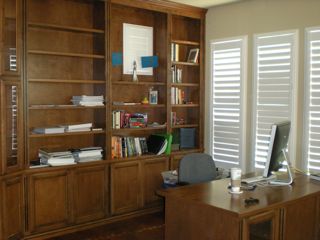 I considered just posting this picture because my office looks so clean! But . . . this was about two days after my bookshelves were built. The barren shelves are all packed with books now.

And here’s the other corner: 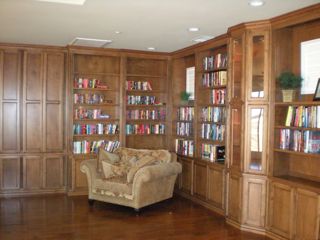 That chair is in front of the TV now, and the corner is filled with kids toys. And the books are doubled up. But it looked clean and organized for awhile!

And this used to be my view before they built houses below me: 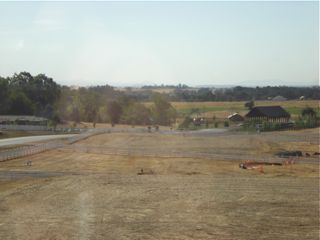 I don’t have that view anymore (it was brown in this picture–taken in August of 2008–but in winter and spring it’s lovely.) Now I look at a house and their roof and driveway. Fortunately, they’re lower than me and I can still see the covered bridge. Not that I look out my window much.

I also have a television in my office. (My office is really a pool house/guest house–but we don’t have a pool and there’s no bed in the guest house, so guests usually take one of my kids rooms . . . anyway, it’s nearly 800 square feet. It’s also where we play games, watch movies, and do art projects and homework. It’s not really all mine . . . )

The photo I took tonight of my television didn’t turn out, but this is the entertainment center right after it was built . . . it now has a bigger tv (that I got from my husband for my last birthday) and there are blankets and pillows all over the floor from when the kids last watched a movie . . . 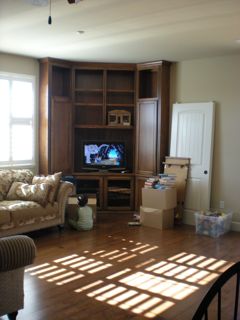 I am not a neat person. In fact, I’m rather a slob. I’ve always been this way–ask my mom (she might even visit the blog now that I finally set up the computer I gave her for Christmas . . . ) and I’m 40. I’m not going to change. I had some idiotic grandiose idea that I was going to clean up the mess surrounding my desk before I posted this blog . . . but what was I thinking? So my office looks more like this now: 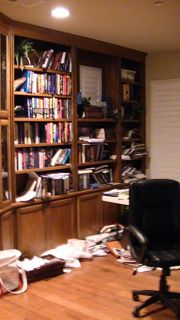 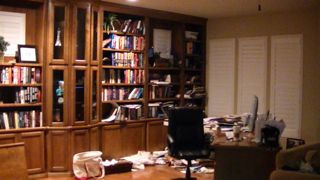 The table that I strategically hid with my chair are all the things (papers, books, etc) I need to find a place for. There are stacks of papers and books and magazines under the table and behind the table. Someday I’ll organize . . .

And my desk area? 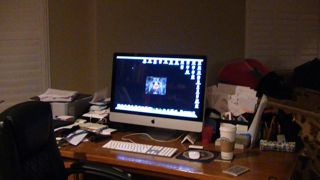 The stack of paper on top of the printer to the left are my finished page proofs for LOVE ME TO DEATH. They’re going out via FedEx Monday morning. The papers sticking up on the right are bills. On the left are more bills, school papers, art projects the kids made me, and assorted stuff.

My process is: sit down and write (on my iMac or MacBook Pro when away, and sometimes on my iPad with wireless keyboard.) I don’t have sticky notes. I don’t have white boards. I don’t have notebooks or scraps of paper or outlines or excel spreadsheets. In the copyedit stage I’ll often make little notes on stickies and put them on the pages of things I want to check on later for consistency, but that’s about it. Everything is in my head, which is scary, becausIe sometimes I forget things. But I’ve tried white board and notebooks and Scrivener and even an excel spreadsheet once. It doesn’t last more than a chapter. The thought of outlining an entire book gives me heart palpitations.

I start with a premise, usually a basic “what if” idea and at least one character I sort of know. I picture the opening scene and start writing. My beginnings–the first 125-150 pages, the first act, whatever you want to call it–take me longer to write than the last 300 pages. Sad, but true. The last book I wrote took me three months to write (and rewrite and rewrite) the first 150 pages +/- . . . and three weeks to write the first draft of the last 400 pages. First draft, I need to repeat, because obviously it was very rough.

My process is insane, but I’ve tried writing other ways and it does not work for me. I write. Get stuck. Go back to the beginning. Rewrite. Repeat two or three or eight times until something clicks and I know I have “it” (the first act) and then the rest of the book flows much smoother. Then when I’m done, I go back and edit, but it’s usually a clean up edit, fixing typos (there are a lot when I’m writing fast) and big inconsistencies. Then I send that to my editor KNOWING I’ll be doing revisions. I need a fresh set of eyes to read it because by this time I’m sick of the book and can’t see the problems. Writing this first draft (I call it the first draft, but I have edited it) takes 2-4 months. Revisions take 2-4 weeks. And I’ll touch every page, even if my editor loves something, because in revisions not only am I fixing story problems/making the characters deeper/heightening suspense . . . I’m also tightening, making the sentences and words stronger, cutting repetition.

I don’t know how the book is going to end when I start. I DO know that my protagonists will live, and the bad guy will get what’s coming to him, but who the bad guy is or how the protagonists solve the crime or stop the disaster, I don’t know. It wouldn’t be any fun if I did!

My brain is like my desk. Messy, but I know where everything is. 🙂

My last five books I’ve written at home (mostly) but I still go Starbucks or BJs (the brewery has closed) when I am on deadline or when I’m stuck. I find the change of scenery helps my muse. Maybe it’s the feeling that people are watching and if I’m not typing they’ll think I’m a slacker :/ Or more likely there are fewer distractions.

Whatever it is, I’ll be at Starbucks Monday morning because I have a tight deadline and I need my muse to get it into gear.

34 thoughts on “A Creative Mind is Rarely Tidy”