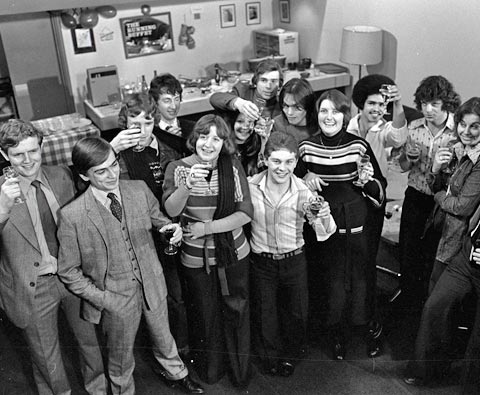 David’s blog got me started. Thinking of that “evil” little boy at the mercy of all those repressed nuns and priests. “When sister or I enter the room, you don’t just stand up. You leap up. LEAP!“ I mean, Jesus, like that’s not going to have some kind of negative effect on the REST OF HIS LIFE.

His blog came to mind again last night when I was clicking through options on Netflix and came across a documentary called “49 UP.”

Do you know the “UP” series? It began as “7 UP” back in 1964, the year I was born. It had a simple premise – “Give me the seven year old and I’ll give you the man.” (Maybe they should have said, “…and I’ll give you the adult,” since half of the kids interviewed were girls. But, hey, this was 1964 and people weren’t particularly PC at the time.)

The idea was to interview fourteen seven year olds (half from lower, working class backgrounds and half from the privileged class) and ask them about their beliefs and dreams for the future. There was a lot of emphasis placed on the socio-economic backgrounds of the kids, with the assumption that each child’s social class would determine what he might or might not be able to achieve in life.

The series has been a life-long project for film director Michael Apted (“Coal Miner’s Daughter,” “Gorky Park,” “Gorillas in the Midst,” “Nell”), who has been the interviewer and organizer since the kids were interviewed at fourteen. No matter what’s happening in his career, Apted always returns to “UP.”

I was introduced to the series when it was “21 UP.” I was riveted, watching each interview juxtaposed to the next, seven and fourteen years apart. For the most part, the kids held to their dreams, but their socio-economic backgrounds did in fact determine the level of difficulty involved in accomplishing their goals.

I watched them last night turning 49. It didn’t occur to me until this very moment that a new installment is about to be released, and that the participants are now 56.

I find this hard to digest. It’s both beautiful and horrifying. The participants seem to feel the same and some have stopped participating in the project altogether. The ones that remain are aware of the social import of this life-long examination, but they remain troubled by the fact that their lives are ripped apart every seven years and presented to the general public to devour and judge.

It freaks me out to see the progression of their lives. I remember when I was in college I saw a copy of Life Magazine with pictures of people growing from babies into senior citizens.  One picture to the next, each taken approximately five years apart.  I was fascinated, I couldn’t put the magazine down. But it was also like watching a horror film–you want to turn away, but you’re glued to every frame. I just can’t get over the fact that it’s happening to all of us. That it’s happening to me.

As difficult as it must be to be a participant in the series, I wish I’d had the opportunity. I’m an incredibly nostalgic person — I make every effort to document even the most difficult and personal experiences of my life. I remember making tape recordings of my teenage years, recording my feelings about life, my political views, my dreams and my sorrows. I told myself I did this for the children I would some day have; to show them that their father had the same fears and concerns that they themselves might have. But I really did it for myself. So that I can look back at my teenage years as an adult and map the way my life evolved.

It would have been hard, I know, but I would have endured it. I imagine what Michael Apted’s camera might have seen…

Age 7. Deciding to become a vegetarian after my older sister visits a meat-packing plant on a sixth-grade field trip. My mother thinks I’ll last two weeks. Who knew it was a life-long decision? I’m sure I’ll become a veterinarian. I carry around a little, black doctor’s bag filled with gauze, band aids and surgical instruments. Ready for the next run-over dog. My mind is set.

Age 14. I wake up and join my mother for breakfast. She is tired, her eyes puffy. She tells me my father has left, he’s gone to live with another woman. Other children. I am pissed, I say the joke isn’t funny. I run from the table. She calls after me, “I’m not joking! Your father is gone!”

Age 21. Bouncing around different bars in San Francisco with a girl I met in Santa Cruz. Celebrating the fact that I can drink. My father killed himself the year before. I am confused, depressed, angry. I just finished writing my first screenplay and a couple short stories. Everything is influenced by the loss of my father. And I’m headed to Hollywood.

Age 28. “Out of college, money spent, see no future, pay no rent.” The Beatles remain a huge force in my life. Been with the same girl now for three years. I’m working in the international marketing department at Disney Studios, as an assistant. I’m still trying to finish the 35mm film I made with my friends. I’d shot the thing on cash-advanced credit cards, loans and donations from people who wanted to see me succeed. Chuck Connors had a role in the film, donating his time. He used to say, “Schwartz, are you going to finish this film before I die?” And then he died.

Age 35. Married now with one little boy and another on the way. Working for film director Wolfgang Petersen. It all seems great except it isn’t. I haven’t become the big screenwriter or film director I dreamt I’d be, and it’s becoming clear it won’t happen as long as I remain where I am. There just isn’t any room for more than one story-teller, and Wolfgang is it. Meanwhile, I’m living a secret life; gentle father and husband by day, street-cruising sex addict by night. I wonder if Michael Apted’s lens captures the chromatic duplicity.

Age 42. Two beautiful boys and a marriage barely saved. The cameras see me attending twelve step meetings and sitting in counseling sessions with my wife. They missed the total chaos that unraveled just a few years before. My wife and I are struggling to work things out, and we’re growing closer in the process. I started writing something new and it helps keep me sane. I call it “Boulevard.”

Age 49 hasn’t come, but it’s just around the corner. If the camera was here it would capture a man content with his life, at last, after finding success as an author. Creativity setting him free.

One thing I noticed after watching those kids turn 49 was that the Sturm und Drang of their lives had subsided. They seemed to have settled into themselves, content with where their lives had led them. Many had not realized the dreams they had at seven, fourteen and twenty-one. They found other dreams to pursue and pursued them.

At 47 I’m no longer the angry young man. I’m not exactly where I want to be, but I’m pretty happy where I am. I’ve been through a lot and the worst of it wasn’t that bad. I appreciate the good fortune I’ve had. And I’ve made good friends along the way. Which, I’ve learned, is the crux of it all.

My voyage to this point looks a lot like the ones I observed in the “UP” series. It makes me wonder if we’re all destined to follow the same path. Maybe it’s the human condition, universal.

I used to think that growing old meant I’d lose my passion for life. I treasured my anger because it showed that I cared, deeply, about being alive. I realize now that the anger was mostly wasted energy. Too many years spent gnawed by anxiety. What did my anger provide? Maybe it lit the fire that wrote my books. There was anger in my books.

Perhaps I don’t have to live the anger to write it.

And Corbett seems to have turned out all right, despite the attack on his spirit by the fathers and nuns.

Still, I haven’t seen “56 UP” yet.  Maybe things fall apart and it’s Mahler all over again. Maybe there’s a post-midlife crisis I haven’t considered.

I guess I’ll stay tuned to find out.