Not sure how this happened, though for once, I’m not wishing I could turn back the clock on the year. On the contrary, I’m ready for 2016 to be behind me because the Year of No turned into the Year of Go, and I feel like I’ve swum the English Channel in chains.

Don’t get me wrong: having work as an author is a wonderful, glorious thing. I’ve just been a wee bit overwhelmed.

As such, the blog has been neglected, but as we’re nearing the end of the insanity, and things feel like they’re calming down, I’m going to come back with snippets and word counts and affirmations. Sunday Smatterings will stay in it’s slot, and I’m going to blog as the spirit moves me.

So there. To hell with schedules, right?

I’ve written about it many times. The general gist: writers try to write 50,000 words in 30 days. That’s 1666 words a day for those of you keeping score. Yes, that’s the usual output for a professional writer, which is why you see some disdain for this exercise from some, but the idea behind NaNo is much more basic. It’s a chance to throw caution to the wind and try something new. Which I love. My 2nd Taylor novel, 14, was a NaNoWriMo winner. I fully believe in the power of the creative spirit, and with so many creatives engaged, the universe becomes full.

So NaNo on, peeps. I’ll let you know how I’m doing as well. I have a new standalone I’m a few chapters into and I want a nice big jump on it. It’s called THE LOST ONE, the story is whack, and I’m looking forward to having some fun. Onward!

Younger daughter: “I want everything. Give me everything. Pizza. Chicken. Pasta. Veggies. A live steer. A wheel of cheese. More more more. I am the Eater of Worlds.”

Mealtime tests all parents. I never wanted to make dinner a battle, because I worked all day. So I made sure at least one thing was something they liked, & then they had to take one bite of everything else. Now? All but one of my kids will eat nearly anything. 1/2

Younger daughter: “I want everything. Give me everything. Pizza. Chicken. Pasta. Veggies. A live steer. A wheel of cheese. More more more. I am the Eater of Worlds.”

😮Holy sh*t! New definition for the phrase: And the show must go on.

The most rock and roll thing you will ever see 😂 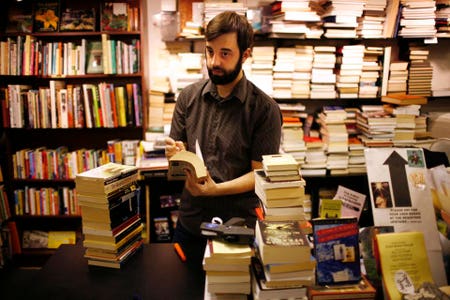 To help indies reach and retain customers in this web-heavy selling climate, three new platforms have launched or are launching soon.

@Noodleepoodlee1 @HeerJeet @GreatDismal @nytdavidbrooks @NewsHour Correction: I hear he's now downsized to a 2 million dollar house. A real man of the people, that one.